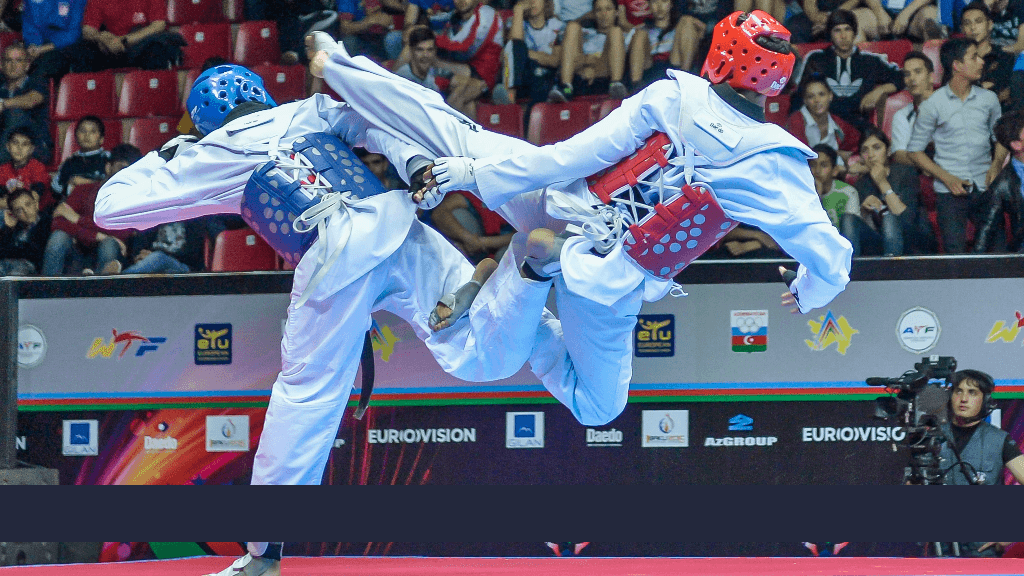 A dynamic Korean martial art and Olympic sport, Taekwondo translates as the ‘the way of hand and foot fighting’. It is a hugely popular martial art, with an estimated 70 million practitioners worldwide.

Taekwondo is associated with its spectacular kicking techniques, and most commonly known to the general public by the its Olympic sparring discipline, although this discipline is only one aspect of the sport and martial art. Taekwondo syllabuses include a wide variety of striking techniques, self defence training, series of prearranged patterns or forms, locks and throws, power breaking of wooden boards and other demonstration elements, and both semi and full contact disciplines of sparring competition. Some clubs exclusively teach a single element of Taekwondo, while others include various combinations of these elements as part of their training syllabuses.

Taekwondo students typically attend tests known as gradings every three to six months to evaluate their patterns, sparring and breaking techniques, and successful candidates are promoted in grade. A practitioner’s grade is denoted by a sequence of differently coloured belts for novice (Kup) grades followed by black belt (Dan) grades.

Taekwondo practitioners may take part in various levels of competition. These typically comprise of one or more disciplines (the most common are free sparring combat and patterns performance disciplines) contested between athletes of the same gender and similar belt grade (or class); sparring competitions are further sub-divided into weight divisions for competitors.

What is the history of Taekwondo?

Taekwondo is a comparatively recent evolution, developed following World War 2 by the original nine Kwans (schools) from its Karate roots, settling on the name “Tae Kwon Do” in 1955. Various mythic origin stories are still propagated, stemming from narratives promoted by Taekwondo pioneers and the Korean establishment after the Japanese occupation of Korea 1910-1945, intended to construct entirely native ‘history’ for the art and sport.  There is a body of academic research detailing the fascinating history of Taekwondo; we would recommend the 2016 iACT Conference articles and similar research including The Making of a Modern Myth: Inventing a Tradition for Taekwondo and The Invention of Taekwondo Tradition, 1945-1972: When Mythology Becomes ‘History’ as useful starting points.

What are the different disciplines of Taekwondo? 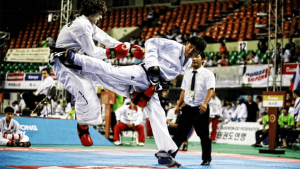 Taekwondo has become a hugely popular martial art worldwide and a number of disciplines are showcased in international competition. The variety of  syllabuses taught are the result of complex history of influences, splits, hybrids and intrigues in the development of the martial art and sport.

While a variety of related disciplines exist, four are by far the most common in competition: semi contact rules sparring, Chang-Hon patterns, full contact rules sparring (as contested in the Olympic Games), and Kukkiwon patterns. These are most frequently taught together in pairs of sparring rules and patterns forms, and are often colloquially known as ‘ITF’ or ‘WT’ syllabuses after the international federations. As in many sports and martial arts the relationships between the various international federations is complex. World Taekwondo (formerly the World Taekwondo Federation) which delivers the WT full contact rules Olympic Games and other international events is a separate organisation from the Kukkiwon, a Taekwondo governing organisation established by the South Korean government in 1972 which trains Kukkiwon syllabus examiners. Following a schism in the largest International Taekwondo Federation following the death of founder General Choi Hong Hi, there are currently three substantial ITF organisations, each overseeing their own international events and each training examiners in largely similar semi-contact sparring and Chang-Hon patterns based syllabuses. A variety of less common disciplines are also practiced, and groups partially or entirely independent from the larger national and international federations also organise competition in one or more of these most popular disciplines.

How is Taekwondo Organised Internationally? 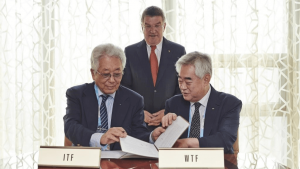 There are a large number of different international Taekwondo federations, and nationally you will find instructors affiliated to a wide variety different organisations providing Taekwondo training. While this variety has resulted in a variety of clubs to choose from, it has also resulted in divisions that have hindered participation between practitioners, and makes it difficult for newcomers to the sport to compare between different Taekwondo clubs and organisations. The BSTF provide independent and impartial advice to students, student unions and university sports departments who have any questions about the provision of Taekwondo training, gradings and tournaments – please contact us if you have any queries.

At an international level it was not until 2014, with the encouragement of the International Olympic Committee, that a protocol of accord was agreed between World Taekwondo (the international federation which oversees the Olympic Taekwondo event) and the North Korean led International Taekwondo Federation. The two organisations pledged to acknowledge their common roots, further their co-operation and promote cross participation amongst athletes across all disciplines of Taekwondo. The bridging of this historic divide taken hold, with an “historic agreement” between the two organisations agreed in 2018 pledging to narrow their difference in the governance of the sport and to organise future multi-discipline competitions (much like our existing Student Championships Series).

How is Taekwondo Organised Within Universities?

Outside of universities the typical model is for an instructor to open a Taekwondo club which they own and control. Instructors are often members of a larger Taekwondo association through which they access grading services and tournaments for their club’s members, and train and grade themselves under their association’s senior instructors.

Within universities the structure is very different, as clubs and their sport departments employ a contracted instructor to teach a certain number of sessions per week, while an elected student club committee controls and operates the club. Students may also purchase an annual membership from a variety of third party organisations which  grants access to a given organisation’s events and gradings, and typically includes a member to member insurance policy to cover training sessions. A club’s coach might recommend all student-athletes to join a particular organisation, but ask to see all of the policy details first as this is not an insurance requirement if your club’s members are already covered by another policy,but may be required to access that organisation’s events. In many cases your union or university sports department will already insure student participants for training on university grounds under a wider policy and hence, student club committees should carefully consider if those memberships are providing good value to their members. These types of individual membership are distinct and different from an instructor’s public liability & professional indemnity insurance (which are much more expensive and only needed by coaches).

If this all sounds rather complex, the good news is that British Student Taekwondo Federation events are open to all university Taekwondo clubs, regardless of third party memberships. The BSTF is a registered charity, and provides representation for all university Taekwondo clubs equally. We are governed by Trustees who are elected directly by the university clubs themselves, working in the best interest of all of our members. We offer multi-discipline championships consistent with the rules of the respective international federations, independently insuring our events so that all university clubs can get on with training and competing freely together in the spirit of university sport – please explore this website to learn more about our work. 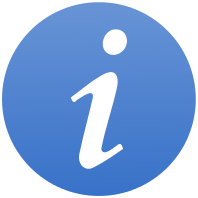 Page load link
error: Invalid action
We use cookies, both the chocolate chip variety and the small text files for tasks like saving your shopping basket contents while you navigate. You can leave them off, but please be aware some parts of the website may not function correctly. Click Here to learn more and press Onward to enable cookies & continue. Onward
Go to Top